Our new gorilla girl at the Dallas zoo is three weeks old and her name is Saambili.

(sam-BEE-lee)  I don’t know that I’ve ever seen anything cuter! 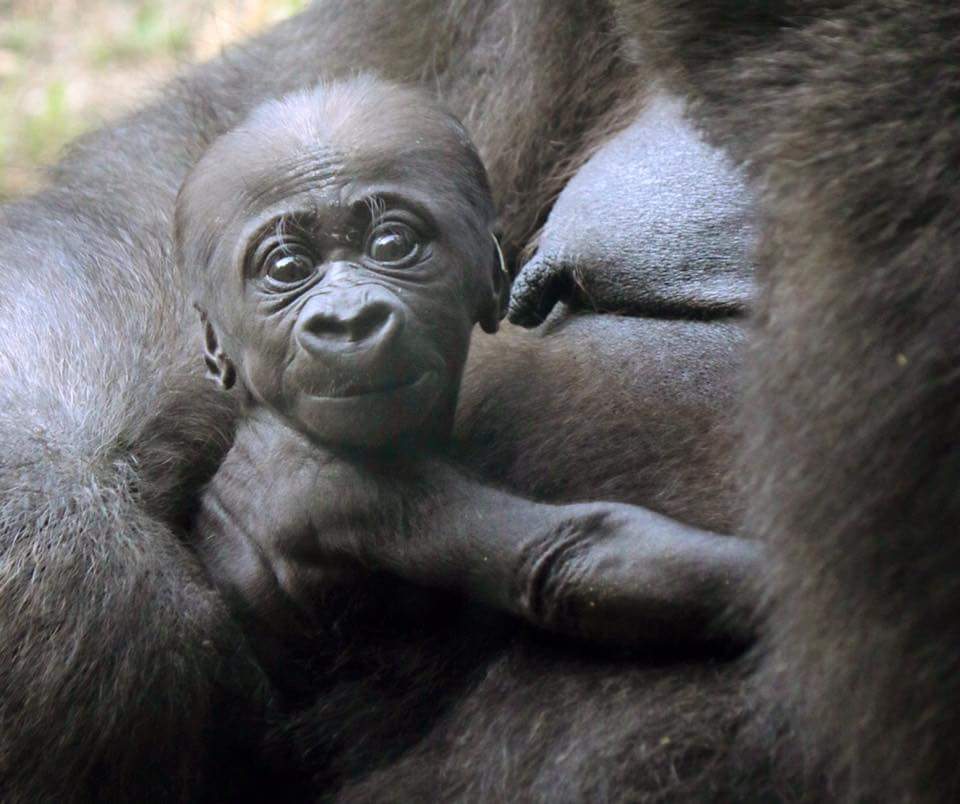 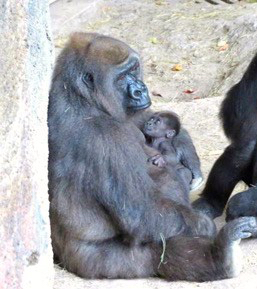 Dad, Shelly, I’m quite sure no one will ever see this because it is text to your phone and who knows where someone who dies phone goes?  Those are the questions I’m haunted with in the last few days.  I didn’t know how else to send you a message except this way; telling of our times, trying to process, get it off my heart, I guess it could have been prayer but you know, technology…..blogs…..I did prayer too, just FYI, hehe.

You died Wednesday morning and it is now Saturday evening.  I feel the need to tell you, even if you never see this, and even if no one else sees this how much you did for me, how much you meant to me, how amazingly there you were for me first as a mentor in the business world 30 years ago and later as a surrogate father.  I know why I wasn’t invited to your wedding to Myra and I know why I have not been informed about the funeral.  It’s okay.  I was and am a weird threat to a couple of your five biological kids and I get that.

Your soul has moved on and I don’t need the formalities.  Our relationship was one of the most beautiful things in my life.  You helped me in ways that could never be understood by others.  In fact, our innocent father/daughter platonic relationship has of course been misunderstood. I don’t care.  You were amazing to me and THEN you set me up on a blind date in the old days before internet dating with my husband of 20 years now and my soulmate, Steve.  I love you so much, Dad, and I will NOT say rest
in peace.

DON’T! Don’t rest!  Continue to do the amazing work you do to help people learn and grow like you did in this life.  l say continue on your journey with joy and I’ll SEE you when I get there!  All my deepest love.  Andy

My Dad’s name was Shelly Dobkins.  He and my now husband Steve worked together for World Savings way back when my husband Steve was a young up and comer and before I knew him.  Shelly always saw something in Steve and admired his intelligence, integrity and class.

I met Shelly when I was young and green in the corporate world after I graduated with a minor in psychology and a major in business management. At 24 years my senior, he became a friend and mentor to me for business and corporate advice.  Then as we talked more deeply over the years he learned that I was (mostly verbally, but sometimes a little more) abused by my biological father and my step father.  He then started taking on more of a personal role in my life paternally.

I finally asked him 20 or so years ago if I could call him Dad.  He was thrilled.  He came when I got a new apartment to check the security, he checked the tires on my car, he made sure the gas stove was working properly, he did all the things no one had ever done for me and that I never even knew needed to be done.

Steve had married young to an Asian American woman and they never had kids.  I think he was married to her for about 7 years.  In the course of their divorce, Shelly being the jewish Dad started harping Steve about meeting me. It pissed Steve off and he told Shelly that he and his wife were not even living separately yet, how would he dare try to set him up on a date so soon! He was harping me too and I thought why would this very good looking man going through a divorce want a woman 3 years older?  Shelly, my Jewish Dad, of course was trying to get me settled with a good man.  So sweet.

Shelly finally invited us to a “huge BBQ” at his and Myra’s house in Newport Beach.  It was four of us.  They left the two of us alone on the patio overlooking the bay with wine.  The rest is history.  I’m married and living with my soul mate.  Shelly found him for me.

So, this man, my Dad, not only tremendously in so many ways helped me as a young, vulnerable woman in the corporate world, he gave me the gift of my life, which is my husband.

I grieve my Father’s death tonight. 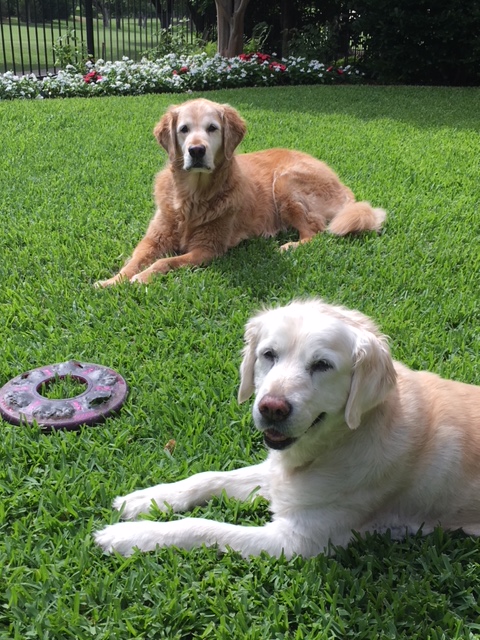 I had a request from a follower for photos of my dogs whom are here with us.  Here are Haley and Troy:

I was reading through some of my old posts today and a while back while I was ranting about Catholicism I used the sentence, “Gay men entered Catholic seminaries so they would have access to alter boys to molest.”  I have many gay men friends and I was mortified when I read it.  That should NOT have said “Gay men” it should have said “Pedophiles” and I am deeply sorry if I offended anyone.

I was on Facebook once for about a minute.  I know everyone loves it but I hated it.  Someone told me it is a way to stay connected to the outer world.  What’s an outer world? The twilight zone?  All I saw were peoples photos and comments about seeing a new hot movie, shopping at a new mall or just returning from a trip to the Bahama’s.  Hardly outer worlds.  I saw strange greetings to peoples loved ones on birthdays and anniversaries which in my humble opinion is private stuff.  I tired of pictures of kids winning soccer matches, people running marathons and new babies.  Do you really care about all this with more than a few people?  And if you did care why not meet for coffee or talk on the phone?

I said all this to someone younger than me.

“Nooooo!” she said, “you are missing the point!”

“Really?” I replied, “which point…..outer worlds?”

“It’s a really good way of keeping in touch with….” her voice trailed off.

“People you don’t want to stay in touch with?” I asked.

I rest my case.

I have never “reblogged” but I just loved this post so much from my friend Linda’s blog. For more on Linda see my other posts “Lovely Linda” and “Sweet Linda.”

I try not to judge because people who judge me are so hurtful.  People who assume things, spread rumors and gossip are just sad and insecure.  Every human being has a cross to bear, some hurdle to overcome, and pain to endure.

No other human being knows your entire story.  Your journey, pit falls, and experiences make you who you are.  Embrace your own beauty, even if others do not see it.  The good people will love you for who you are, keep them close.

We are all such fragile beings.  We all make mistakes.  We all deserve to be forgiven and go on with our lives learning lesson after lesson as we age.  It is a constant.

The punishers are people who deem it their job to make you pay for your sins for eternity.  No one on this Earth has a right to punish anyone else for mistakes.  I…

In response to a comment on my last post, I thought this should be out there. Thanks my friends.

Thank you, Lisa. Beautiful comment. And yes, in my STRONG opinion there is no conflict between evolution and God. Some higher power/being/God/Universe obviously orchestrated this entire life thing we are living/humans AND animals….this could not be a random mistake. From an animal standpoint there is so much intense beauty, a Mandrill’s colorful face when she looks at her little baby boy, Obi at the zoo while he jumps on her head with youthful enthusiasm, the gorillas playing and laughing in the rain, the penguins all lining up and standing there for so long and then jumping in the water all at the same time, the 500 pound tiger who prefers to be alone playing with a huge work out ball in the water, the cheetah and her best friend the black labrador retriever whom she has been raised with since birth and who live together now and let zoo guests see them prance and play when they are in the mood.

Why wouldn’t God allow evolution? It’s such a beautiful process. We share 98.4 percent of our DNA with gorillas yet we are not gorillas and gorillas are not human. In fact, science tells us that we had a common ancestor who we branched off from the gorillas and who is now extinct. Why would we not try to understand these beings as brothers and sisters? Why does that conflict with there being a God?