Let’s talk about zoos. In the old days many zoos were a nightmare for the animals. It causes me so much pain when I read or think about it that I can barely stand it.

All accredited zoos in the US are now conservation zoos overseen by AZA. (Association of Zoos and Aquariums) Zoos no longer prioritize human entertainment over animal comfort but instead understanding, care and conservation of the species. We do not use operant conditioning (a fancy word for training) to entertain humans. We use it to train animals like chimps, gorillas, elephants and others to do body part presentations through mesh fencing for the sole purpose of being able to administer medical care without constantly anesthetizing the animals. When a keeper asks a chimp to open his mouth, show the bottom of his foot or put his ear up to the mesh, it is entertaining to the humans. But, that is not why they are taught to do it. Obviously, most zoos are for profit and humans pay for tickets and want to see animals so we make it as comfortable as possible for the animals to be in areas where the humans can see them, but the highly intelligent animals all live in habitats where they can distance themselves from humans if they choose to.

The adjunct priority in accredited zoos is the proliferation and prolongation of the endangered species in the wild (of which there are so, so many).  All breeding within the captive population of endangered animals is overseen and controlled by a very stringent organization called Species Survival Plan. They track DNA of every single captive individual within the endangered population and give permission, which they call “recommendations” for who can breed with whom. All zoos world-wide are in cahoots on this. It all has to do with genetics, bio-diversity and personalities of who will do well in captive habitats. Most zoo animals do great in captive environments because they were born in one. It is now illegal to take animals from the wild and put them in captivity and most who were have died off now. Keeping the captive population bio-diverse (ie, you don’t want cousins mating with cousins, etc.) is critical so that if the species goes extinct in the wild, our grandchildren can still see these animals and in some cases, zoos may have a chance to breed enough to get them back into the wild.  (Unlikely so please recycle and do what you can for conservation!)

Because of the strict AZA rules, animals in zoos today have it made. They have beautiful habitats, no predators, they are fed exactly what they need, they get treats, they have keepers who adore them, the get “enrichment activities” which is fun for them and makes use of their innate abilities and tendencies. Our chimps, for example have a beautiful, lush habitat with tons of space, no predators, all the food they need, indoor bedrooms with toys and fun things to do for nighttime and any medical care they might need. They love, play, yell, fight, make up and groom each other just like they would in the wild.

Social animals are insured they will not be alone as it is now illegal in an accredited zoo to have only one of a social animal. So if a zoo is down to one elephant, one gorilla, one chimp, etc. it either has to bring more in or send the one to another zoo so it can be with it’s own kind for companionship. Solitary animals (animals who are normally solitary in the wild, like every big cat except for lions) are kept solitary which is what they want and need.

Bottom line: Zoos now are really about the best interest of the animals.  When decisions are being made the first question always is, what is best for the animals?

The buddies laughing and playing.

Shauna in His Pool

A keeper at a Florida zoo who was the senior “big cat” keeper and was known as the “cat whisperer” was mauled and killed by her favorite tiger a day or two ago.  This happens way too often.  She was in the friggin’ cage with him.  Wrong!
There are zoos that are “protected contact” and then zoos that are not.  Protected contact means that you only interact with a potentially “killer” animal through some kind of protection.  For example, at the Dallas zoo, the keepers are very intimate with the gorillas and chimps but always through heavy mesh fencing.  Because of that, there is no way the keepers could be harmed by the animals.  The Dallas zoo also adheres to protected contact with lions, tigers, mountain lions, etc.  We are a protected contact zoo.
Gorillas are not “killers,” they are very gentle by nature, but because of their size and strength they could crush a keeper with an affectionate hug.  Chimps on the other hand can be very aggressive and as cute as they can be, especially the babies, they are very dangerous. I am a huge believer in protected contact because our keepers at the Dallas zoo don’t get killed and never have and keepers at non-protected contact zoos have.
I get it.  I know what happens.  Keepers in non-protective become somehow immune to the fact that the animals they love and the animals they believe love them are wild animals.  They begin to believe that their bond with the animals is something very special and different.  They think the animals love them.  And they might be right!  But they are WILD!  They turn on a dime.
I think keepers who love their  animals might lose sight of this.  These animals hear or see something out of the corner of their eye and they attack whatever is in front of them.  I’ve seen chimps do this.  Thats what happened in the recent killing of the keeper.  Everything was fine until she turned her head and the tiger heard or saw something that was upsetting and attacked the first thing she saw, and someone she probably otherwise loved.
All I can say is “Siegfried and Roy.”
13 Comments April 9, 2016 andreathompson2

“How many monkeys do you see in there?” a young woman asked her two year old at the zoo today.

We were at the Chimp habitat and I could see about 7 of them.

“Zero,” I said to myself in a whisper, “there are no monkeys in there.” 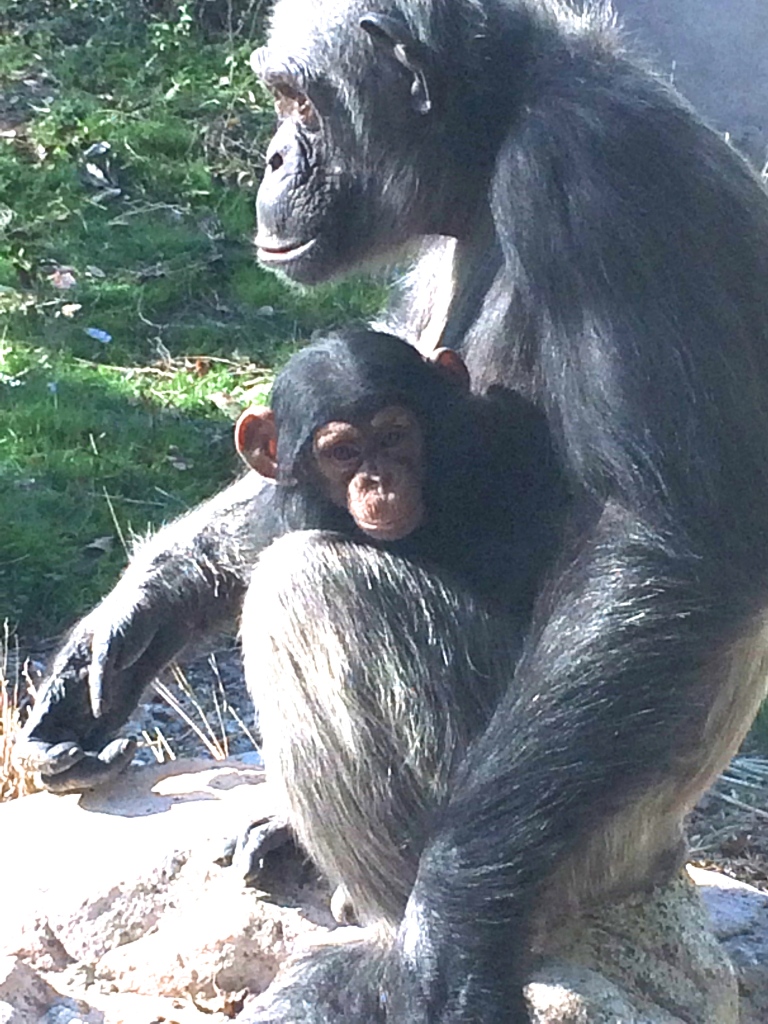 Mishindi and his mother, Ramona