In Texas, twenty percent of our enormous Barnes and Noble has been allocated to Christian Studies and Bibles and nothing opens until noon on Sunday because everyone is at church. And, you can’t buy alcohol until noon on Sundays because you should be in church, too, not out buying booze. The ironic thing is, on early Sunday afternoons every restaurant is packed to the brim with people drinking Mimosas, Grasshoppers, Bloody Mary’s or white wine.

Okay, now that I got that off my chest, there was this guy at the zoo where I volunteer and he and I were observing Gorillas together. At the Dallas zoo you can be 1 inch away from a 425 pound Gorilla. There are 3 layers of treated glass between you and him but you can stare into his eyes and he can stare into yours.

More dramatic than that, the big boys often get annoyed but mostly show-offy and will “display” which includes running up and back by the glass, pulling branches off trees and waving them, chasing each other, throwing rocks, pounding their chests, and my favorite, turning toward the crowd suddenly, rushing to the glass quickly, then aggressively pounding on it. It is so alarming that every human instinctually vocalizes in some way and jumps back. Even me, and I’m used to it.

“So,” I said to this guy, who was clearly fascinated with gorillas, “according to the Smithsonian Institute their DNA is 98.4 the same as ours.”
“I know,” he said.
I went on, “They have the opposing forefinger/thumb relationship; it’s like they have four hands. They can do anything with their feet that they can do with their hands. You can actually consider their feet superior to ours.”
“It’s amazing,” he said.
“They don’t like deep water; they are so densely muscular that they would sink and drown and they instinctively know that.” I continued.
“I didn’t know that,” he said.
“Yeah, and unlike how they are portrayed in movies, these guys are very gentle, peaceful animals. Chimpanzees are far more aggressive by nature than Gorillas.” I said. “Do you know that gorillas laugh?”
“They do?” he looked surprised.
“Yes,” I said, “I observed them in the rain for the first time the other day and they were chasing each other, lumbering in a bipedal position in what looked like avoiding getting their knuckles muddy, banging each other on the head and laughing. It was magical. I did some primatology research and they do indeed laugh. They also cry when they are sad.”

He suddenly looked sullen and glanced around cautiously.
Then, very quietly he turned to me, looked me in the eyes and said, “I’m the only one in Texas who believes in evolution.”
I paused in astonishment. I was so new to Texas. I took a minute to think.
“No, sir.” I finally said, “There are two.” 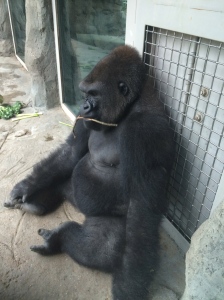 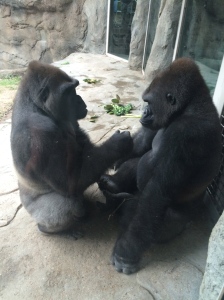 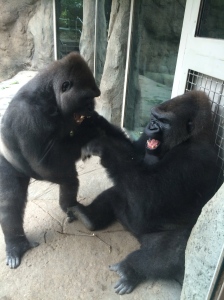 The buddies laughing and playing. 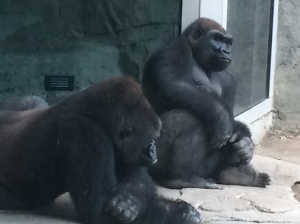 Wow, that was exhausting.

17 thoughts on “Gorillas In My Midst”

Talk to me, ya'll! Cancel reply